Defination of Macro is an automated input sequence that imitates keystrokes or mouse actions. A macro is typically used to replace a repetitive series of keyboard and mouse actions.

By running a Ronan A+ Macro, gamer are able to trim down time normally consumed by repetitive tasks and leave their computer alone or their do (alt-tab) browse/play other games and watching movies while macro run in background.

Call out the gang and battle in the world of Nevareth! Kill the Monster Spawns and get awesome in-game items. 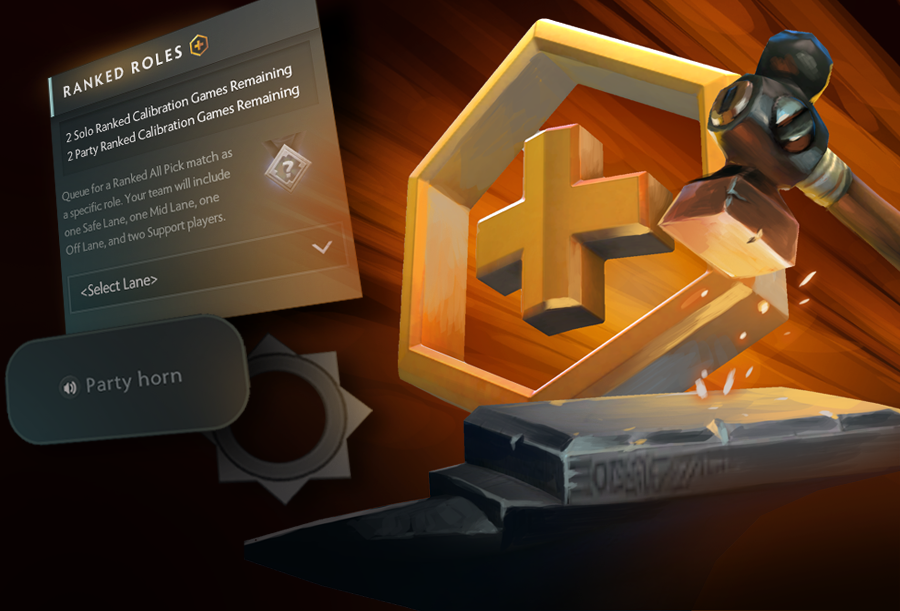 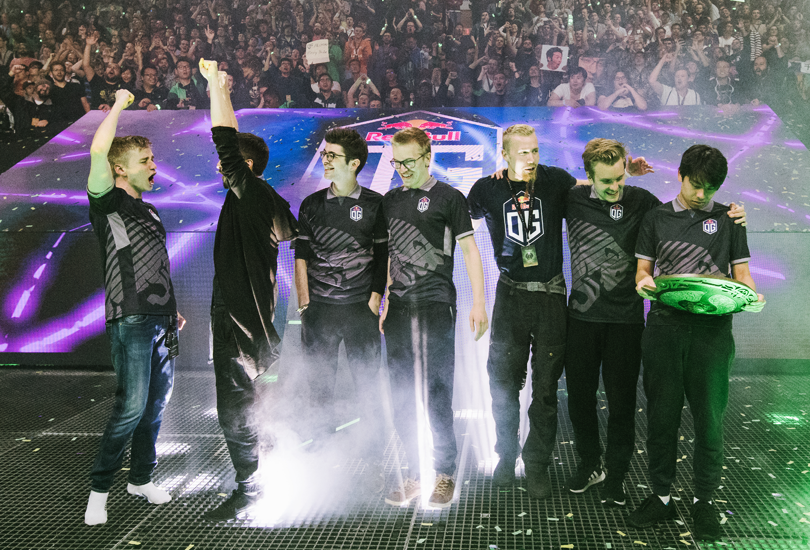 The Road to the Aegis

Congratulations to OG, Grand Champions at The International 2018.

OG defied all predictions, making the journey to this year’s tournament through the gauntlet of the Open Qualifiers.

At first, they struggled in the group stage. But an impressive run over the final two days helped secure fourth seed and a trip to the Upper Bracket of the Main Event.

On the main stage, top-seeded VGJ.Storm were waiting. The North American squad drew first blood and kept on rolling. Riding the play of newly-returned Ana, OG weathered the early aggression, taking game one in a sudden reversal, and maintaining the momentum for a 2-0 series win.

Next would come a grudge match against Evil Geniuses. After a convincing win in game one, OG looked to close out the series, opening up a big lead. But Evil Geniuses showed amazing resilience, clawing back to force a game three. In the rubber match, Evil Geniuses tried to smash OG’s defenses — which bent but did not break. A clutch buyback teamfight wiped Evil Geniuses’ chances, and earned OG a spot in the Upper Bracket Final.

With a spot in the Grand Final at stake, OG’s next series came against PSG.LGD. After trading the first two games of the series, OG outlasted the DPC powerhouse in a tense battle that saw PSG.LGD throw all their heroes at the OG throne. With the help of Jerax’s Earthshaker, OG barely held on, storming across the map to make a victory push of their own.

But PSG.LGD defeated Evil Geniuses in the Lower Bracket Final to set up a rematch, and a five-game Grand Final series for the ages.

There, PSG.LGD would take a 2-1 series advantage before pushing OG to the brink in game four. As they had done throughout the tournament, OG held on. Leveraging plays both crafty and clutch, they were able to outlast PSG.LGD to force a deciding game five. With an unorthodox draft of heroes that hadn’t seen much success in the tournament, OG once again held out against an early PSG.LGD lead, turning the game around at the 25-minute mark and never looking back. Massive underdogs at the start of the tournament, OG took game five, and with it, the Aegis.

As bearers of the ultimate symbol of victory, these names shall forever be inscribed upon the Aegis of Champions:

If you missed any of the tournament, or just want to relive the incredible moments and plays, head over to the Dota 2 YouTube channel, where you can find replays of the entire tournament, including broadcast content from in between the games. You can also find a stash of photos from the event over on the Media page and the Dota 2 Flickr.

We would like to thank all of the players, talent, and everyone in the Dota community for helping bring this celebration to life. The International is the crowning moment of the competitive season, and without everyone’s support, none of this would be possible. We hope you enjoyed this year’s tournament as much as we did.

In the wake of The International, we’re extending the Battle Pass for two more weeks. So everyone that was busy watching OG’s road to the Aegis can now enjoy their Battle Pass features until Monday, September 10. 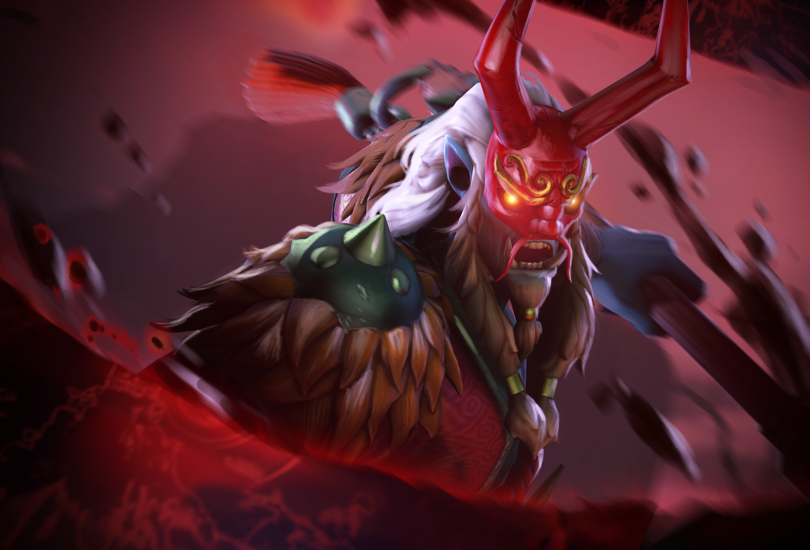 Today’s update releases a new hero — Grimstroke — into the world.

Chosen to serve as an arcane guardian of his people, Grimstroke was instead responsible for their eternal corruption. Trapped in agony as inky revenants, his former kindred cast cruel shadows of what might have been. But the sacrifice infused Grimstroke with great power, and he considers it a price well paid.

Learn more about Grimstroke and his abilities here. Or just launch Dota 2 and try your own hand at wielding the master’s brush.

Following Grimstroke’s release, the next hero debut will come this winter when Mars strides onto the battlefield, ready for war.

Don’t miss out on the thrilling conclusion of The International tomorrow, August 25th. Broadcast begins at 10:00am PDT, and you can tune in right here on Steam.tv.

Alongside The International Main Event we’re shipping a big update to Steam Broadcasting, making it the best way to watch the tournament at home.

First, we’ve integrated Steamworks support into broadcasting to allow us to tailor the viewing experience specifically to Dota 2: you’ll see markers for match starts, first bloods and team-fights populating the timeline as you watch live. We’ve also updated Steam Broadcasting with a new Live DVR feature, making rewind available as soon as you join the stream and allowing you to smoothly jump back and forth through the action. Combined with this custom Dota 2 Steamworks integration, you won’t miss a second of the action.

Secondly, we’ve brought Steam Broadcasting to Steam Chat to create The International Watch Parties. In the past, if you wanted to watch TI with a select group of folks, there wasn’t really an ideal way to do that. Now there is. 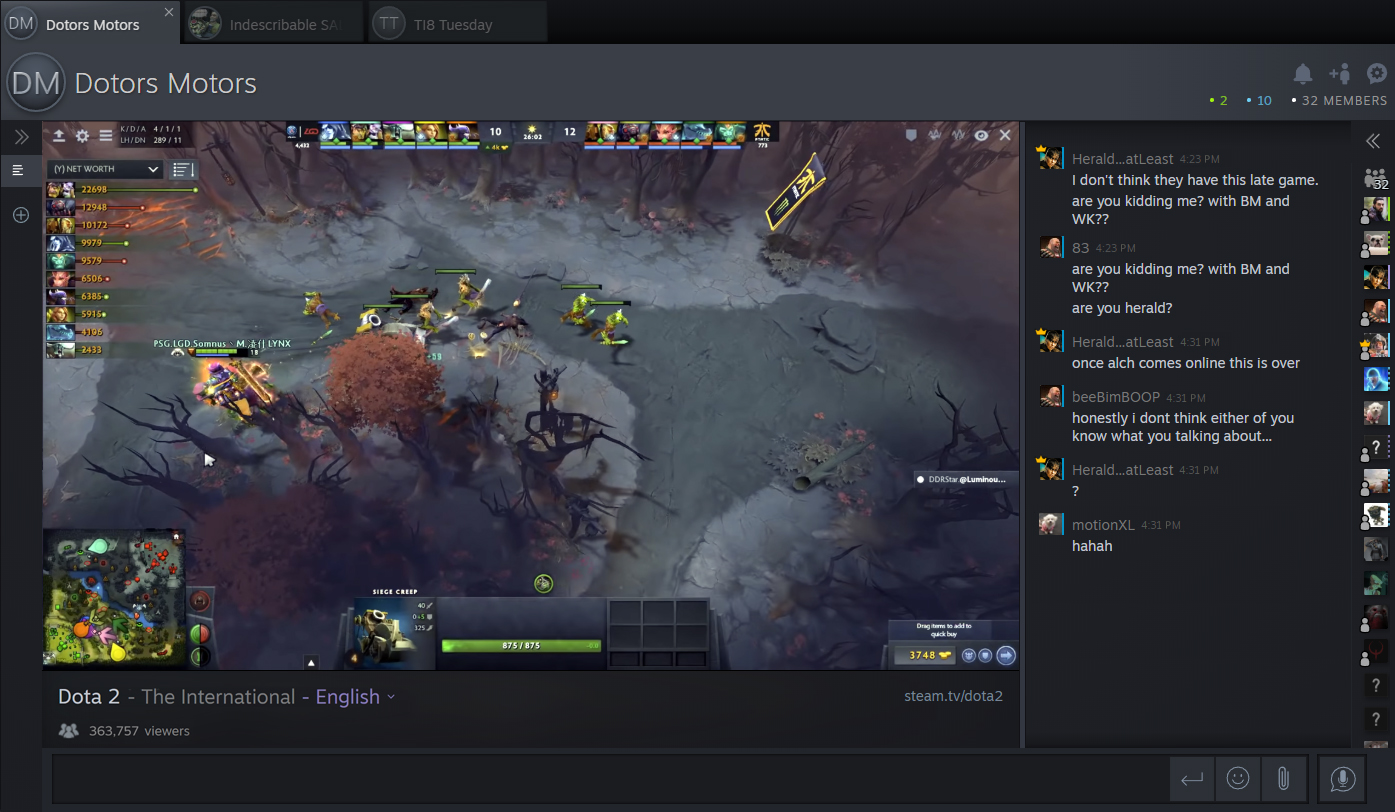 We recently updated Steam Chat to support what we like to do the most: gather a small group of people in our own private space to talk, chat and play games. We’ve now integrated Steam Broadcasting into chat so those parties can now watch TI together. You can create text and voice channels on the fly and there’s effectively no limit to how big (or how small) your group can be. It is the perfect way to watch TI with friends. And if things get a little too rowdy you can always create more custom chat channels for rival fans in your group.

Head over to Steam.TV now to stream The International with your party or watch with everyone in global chat.

This Dota 2 centered update to Steam Broadcasting currently includes some custom elements to support The International. After the tournament we plan to extend Watch Party support for all games that are broadcasting on Steam and expose a new broadcast Steamworks API to Steam partners. 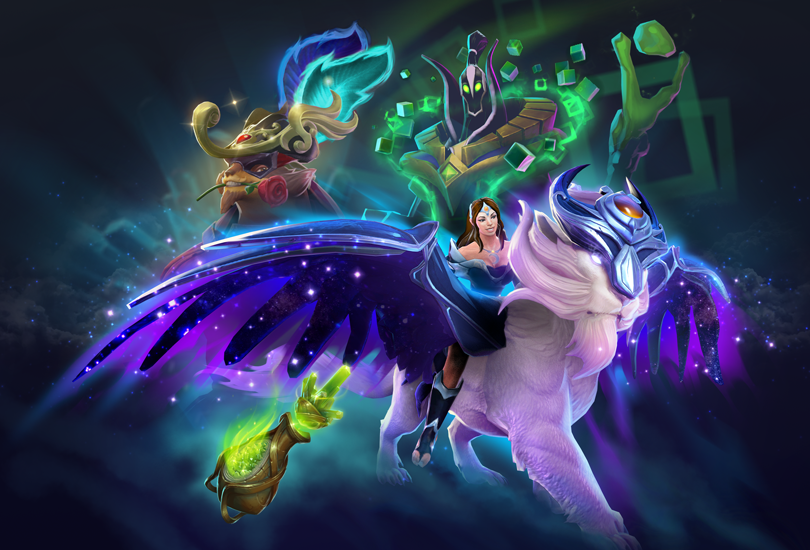 The Trove Carafe for The International 2018 is now available, featuring all-new items for Huskar, Ogre Magi, Pangolier, Venomancer, Rubick, Disruptor, Silencer, and Storm Spirit — as well as the debut of a reworked model for the indomitable Huskar to celebrate his new Immortal.

Each treasure also offers the chance to receive a rare Windranger item, a very rare Golden version of the Storm Spirit item, or an extremely rare mount for Mirana.

Choose to support your favorite broadcast talent at this year’s event by purchasing autographed versions of the Trove Carafe. Just select the desired caster from the dropdown menu in the store to inscribe their autograph onto the contents.

This year will once again feature the chance for special item drops for audience members inside of Rogers Arena. At First Blood in each individual game, a limited number of exclusive Attendee Treasures will drop, each containing visually-unique versions of items selected from this year’s Immortals, and inscribed with a first-blood tracking gem. To be eligible, you must have a badge linked to a Steam account and be in the arena when First Blood occurs. We look forward to seeing you at The International.

After four days of intense action, The International 2018 Group Stage has now concluded, resulting in the elimination of Invictus Gaming and paiN Gaming.

The broadcast begins at 10:00am PDT. Check out The International website for more info on all the ways to watch.

After much anticipation, developer Eyedentity Games - the developers responsible for creating the original Dragon Nest Online for PC - and publisher Nexon Thailand are excited to open pre-registrations for World of Dragon Nest, the Open-world MMORPG coming to the iOS and Android platforms on 8th January 2020. Players who register ahead of time will also receive a special in-game mount upon launch, as well as various prizes worth up to 2,600 PHP.

Players interested in securing their place in the World of Dragon Nest early can do so by:


You can also take part in the Reward Hunter Event by Liking the official World of Dragon Nest Facebook Page. Reach the various milestones to unlock amazing prizes for everyone!

This World of Dragon Nest launch is official, no player data reset will happen. The player data reset was only done in the ending of WoD Closed Beta Test (CBT). The official launch of the game is a stable release, and it will be available in the Philippines and other SEA region including Malaysia, Singapore, Indonesia, and Thailand.

For the latest news and updates on the World of Dragon Nest, head to WoD official Facebook page at https://www.facebook.com/wodseapage